This March marked the return of the McDonald’s All-American Games, after a two-year hiatus due to COVID. With all the hype and anticipation surrounding the games, it was imperative that every aspect of the experience matched the occasion. The players did their part, as we all knew they would. Lil’ Baby gave an awesome halftime performance. And the fans had all the “excited to be back in the building” energy you could ask for. With so much surrounding these games, being the 45th Anniversary of the boys and 20th Anniversary of the girls game, so of course, you need someone to provide a voice for the event, that would match the electricity that would undoubtedly fill the arena. There was not a more obvious choice than Brittney Elena. She’s been involved in some of the biggest events, from hosting BET Celebrity Games to NBA All-Star Weekend. I had a chance to chop it up with her about MC-ing the McDonald’s games and what it means to be a part of something of this magnitude.

Even with a resumé as extensive as Brittney’s, she still brings the same zeal and passion every time she picks up the mic. She said getting the call to host the games was truly a blessing. With the event taking place during Women’s History Month and it being such a monumental year for the girls game, Brittney is grateful that she was chosen to have her voice serve as its backdrop. Her love of basketball, combined with her passion for the performing arts, made her the perfect candidate for this role. Though many of the participants in the McDonald’s game will go on to pursue their hoop dreams professionally, Brittney wants her story to be an example that you can still be involved in the game, even if it’s not in a playing capacity. She needed to pivot, once the injury bug started biting and with her charisma – giving the game a vocal identity, was an organic next step.

With Brittney’s exuberance, has come a huge social media following. And now that things like NIL have arose, she wants to make sure these student-athletes can take full advantage of the opportunities that they’ve been presented with. She said she’s been able to establish her brand, by simply being herself and moving with intention. Staying true to herself has been the biggest catalyst to her success and she implores this next generation to do the same. Letting passion guide you is a sure fire way to maintain your individualism. You can still get to the bag without compromising yourself or taking on projects, simply because a dollar sign is attached. This mantra has been Brittney’s North Star and it’s helped guide her to an already magnificent career.

Even with everything she’s done thus far, Brittney doesn’t take any opportunity for granted. She said she was ecstatic when she got the confirmation that she’d be hosting the games. And in that same vein, she continuously pushes herself to continue to achieve more. Brittney’s perpetual frame of mind is, “what can I do next?”. That’s given her the chance to constantly scratch things off the list. Being a part of the McDonald’s All-American Game was always a dream of hers and it finally came to life. Brittney has a deep connection with this up and coming crop of young hoopers. That was evident in her interactions with the girls. At one point, Janiyah Barker ran up and embraced her, while they both shared huge smiles. In everything she does, Brittney wants to shine a light on women’s basketball and continue to push the game forward. With the way she represented at the games this year, she continues to leave her mark and make sure she leaves the game in better shape than she found it.

Brittney is a staple in the game and it’s safe to say she’ll be here for the foreseeable future. Lending her voice to the McDonald’s All-American Game is just her latest contribution to the culture and one that she will forever cherish. Whether Brittney’s gripping the mic or doing her thing on-court in a celebrity game or open run, she’s definitely going to make a show of it. It’s great to see her in her element, whenever the opportunity presents itself. Next time she’s in the building, we’re pulling up for sure.

Newsletter
In this article:Brittney Elena, feature, made for the w, McDonald's All American Game
Up Next: 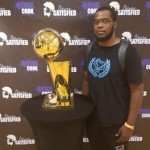