Sharper creative expression and refined-fit insights directly from players guide the new Nike uniform system and apparel offering for the WNBA as the league embarks on its 25th season. Together, the assortment offers the most comprehensive player, team and fan apparel collection in the league’s history.

“The basketball uniform is an important representation of the brand of WNBA players and teams, and a point of pride for fans,” says WNBA Commissioner Cathy Engelbert. “In partnership with Nike, unveiling new and exciting adaptations of the WNBA uniforms is a dynamic way to build on the foundation of the league’s first 25 years.”

The new WNBA uniform system from Nike feature three game uniform editions for each of the 12 teams in the league, bringing stories from their cities and communities to life through the muse of female archetypes in storytelling and film: the WNBA Nike Heroine Edition, the WNBA Nike Explorer Edition and the WNBA Nike Rebel Edition.

“When our team met with our athletes, their feedback was very clear,” says Tania Flynn, Nike VP of Women’s Apparel Design. “They wanted a uniform that fits them, not one they have to fit into. They wanted a connection to their team and fans, but also wanted to express their personal style. And they wanted us to tell their story. The new uniforms obsess all of those details for the world’s best players, technically and creatively.”

Continued feedback from athlete testing reaffirmed the importance of proper fit. Players should never need to “hack” their way to a better-fitting uniform by, say, rolling their shorts to cinch the waistband or tucking their jersey straps into their bra straps to hold the jersey in place. The new WNBA Nike uniforms come with an entirely re-engineered chassis and feature new proportions in the game jersey and short. They also debut Nike DRI-FIT ADV technology — an engineered knit material that helps enable more freedom of movement and comfort — in a professional league uniform.

“We have uniforms that are uniquely ours,” says Seattle Storm point guard Sue Bird. “Every single jersey shares a story that represents our city, and the distinction allows us to express our own creativity and individual style. Nike’s attention to each design detail makes me proud to put the uniform on.” 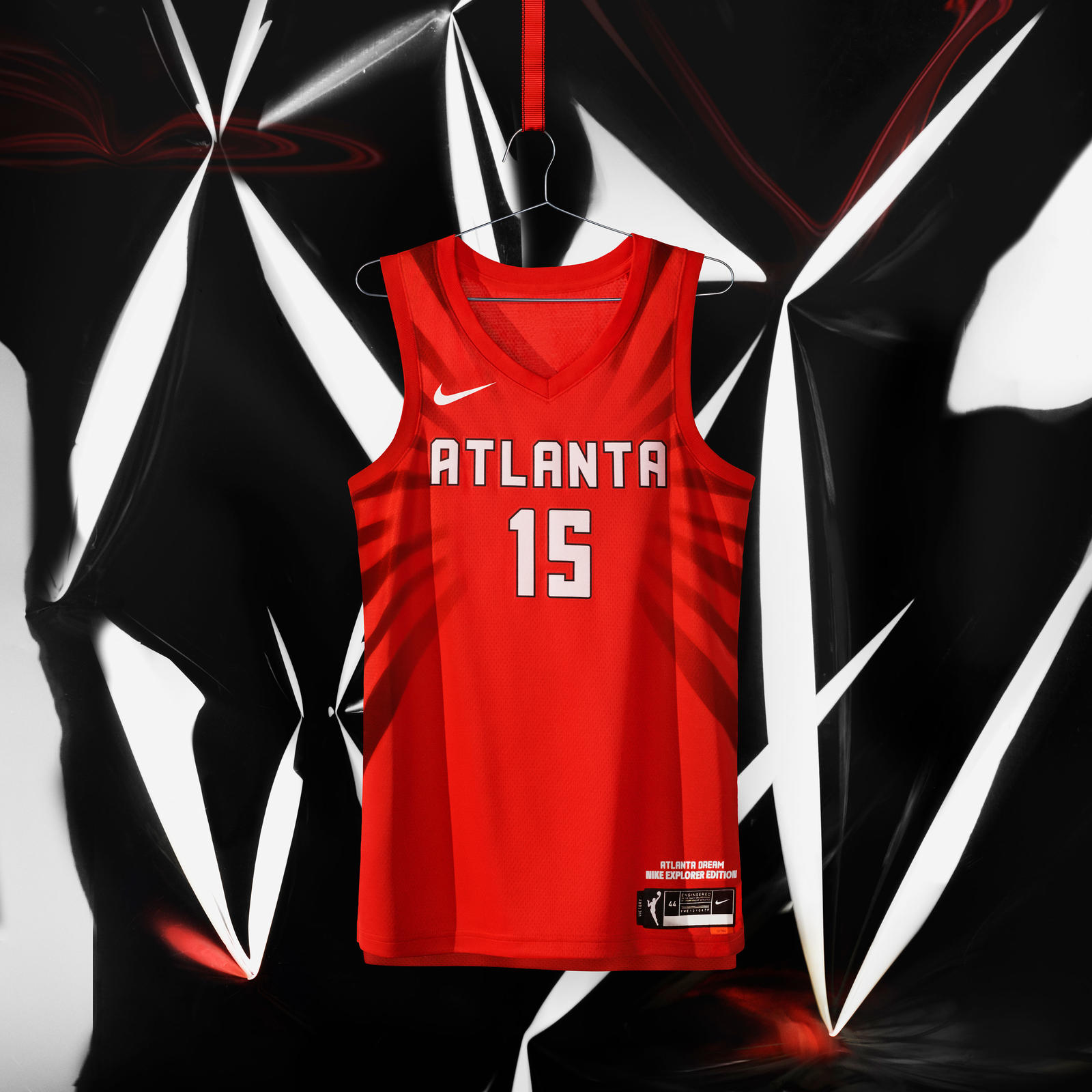 Designed in collaboration with Nike, the “Dream” and “Atlanta” wordmarks are front and center in bold typography and draw inspiration from the signs made during Civil Rights marches. 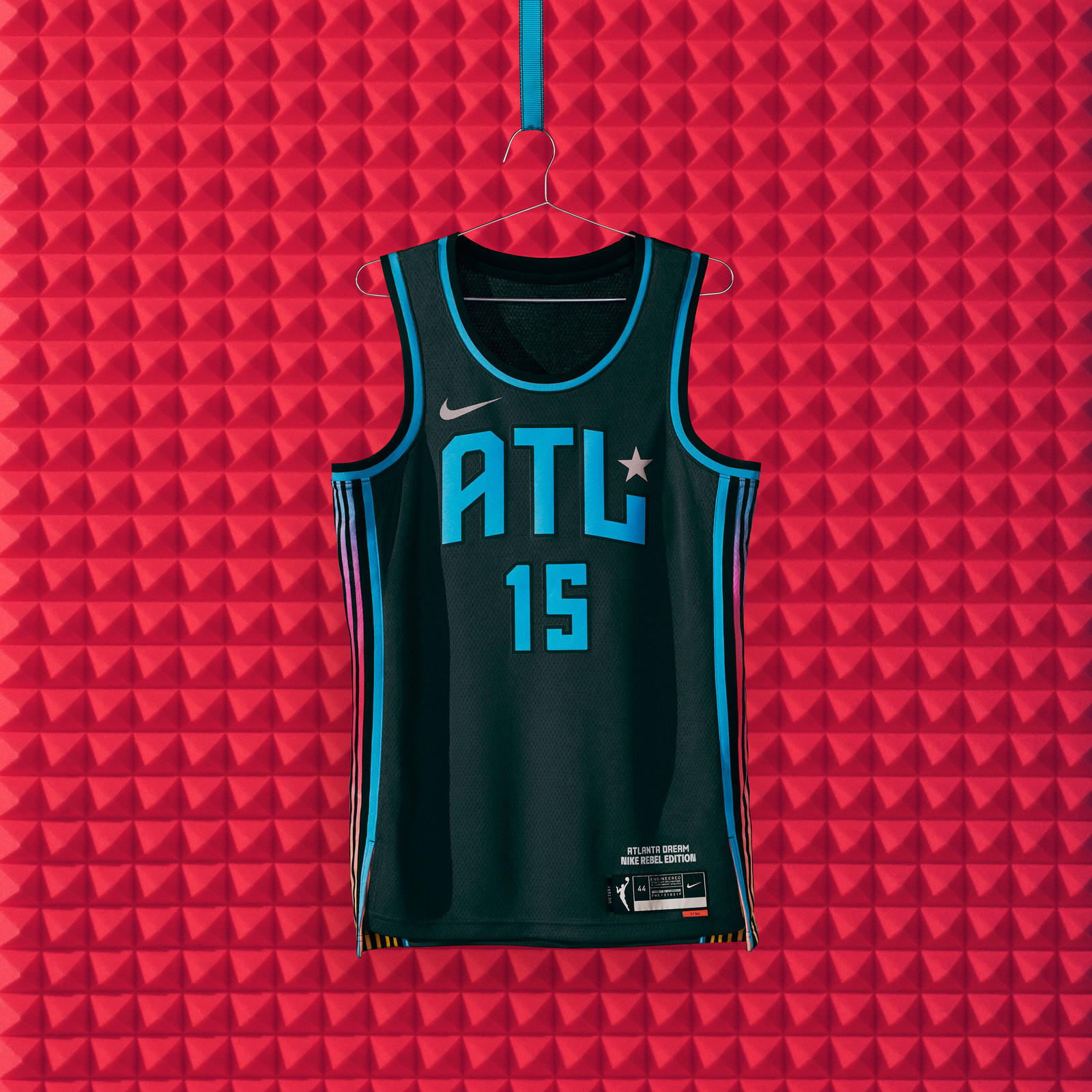 The subtle hints of silver in the uniform — such as the silver star and logo detailing — are symbolic of the platinum and gold records produced in the city. 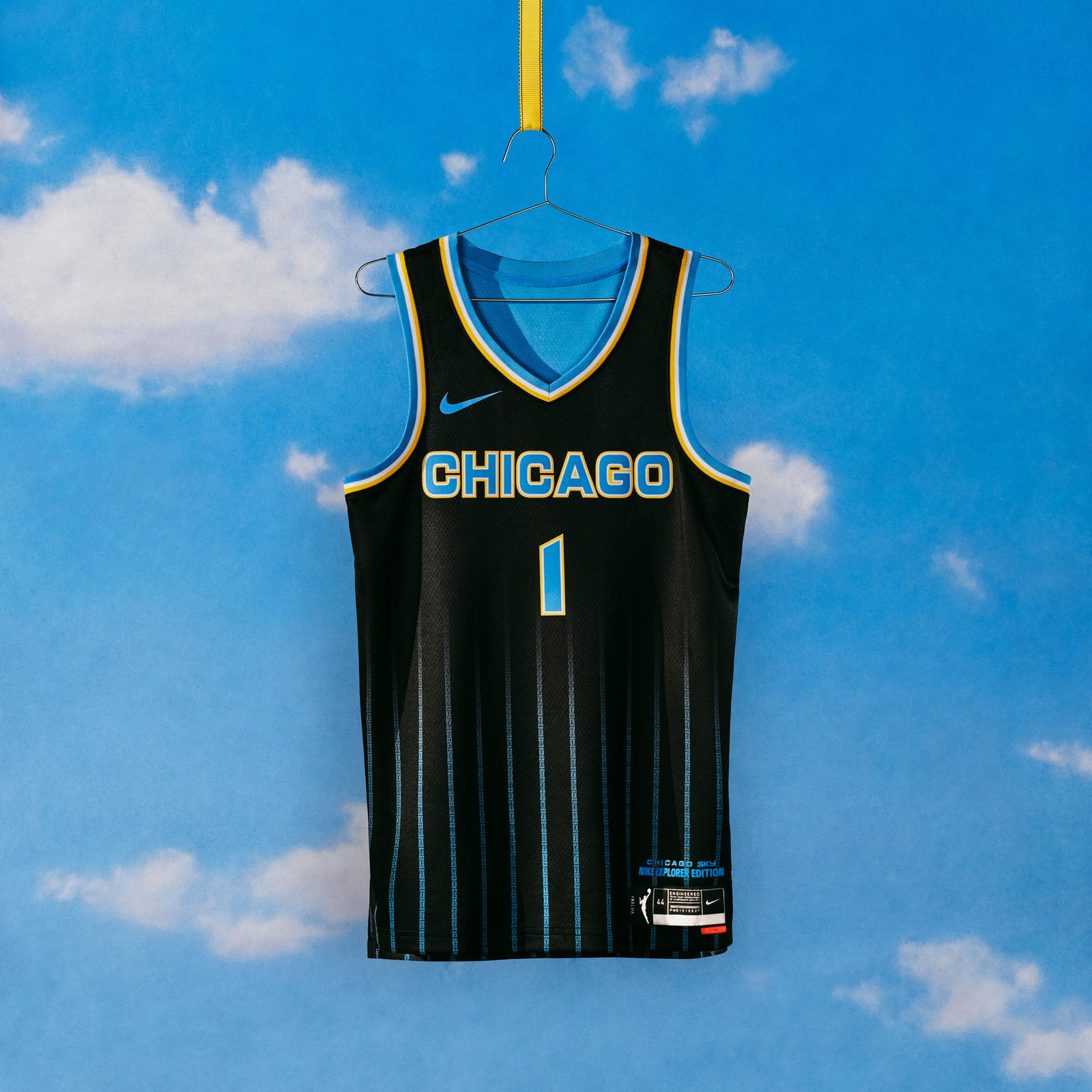 The 10×10 pinstripe grid represents Chicago’s city blocks and the 5-on-5 for the number of players on the court. 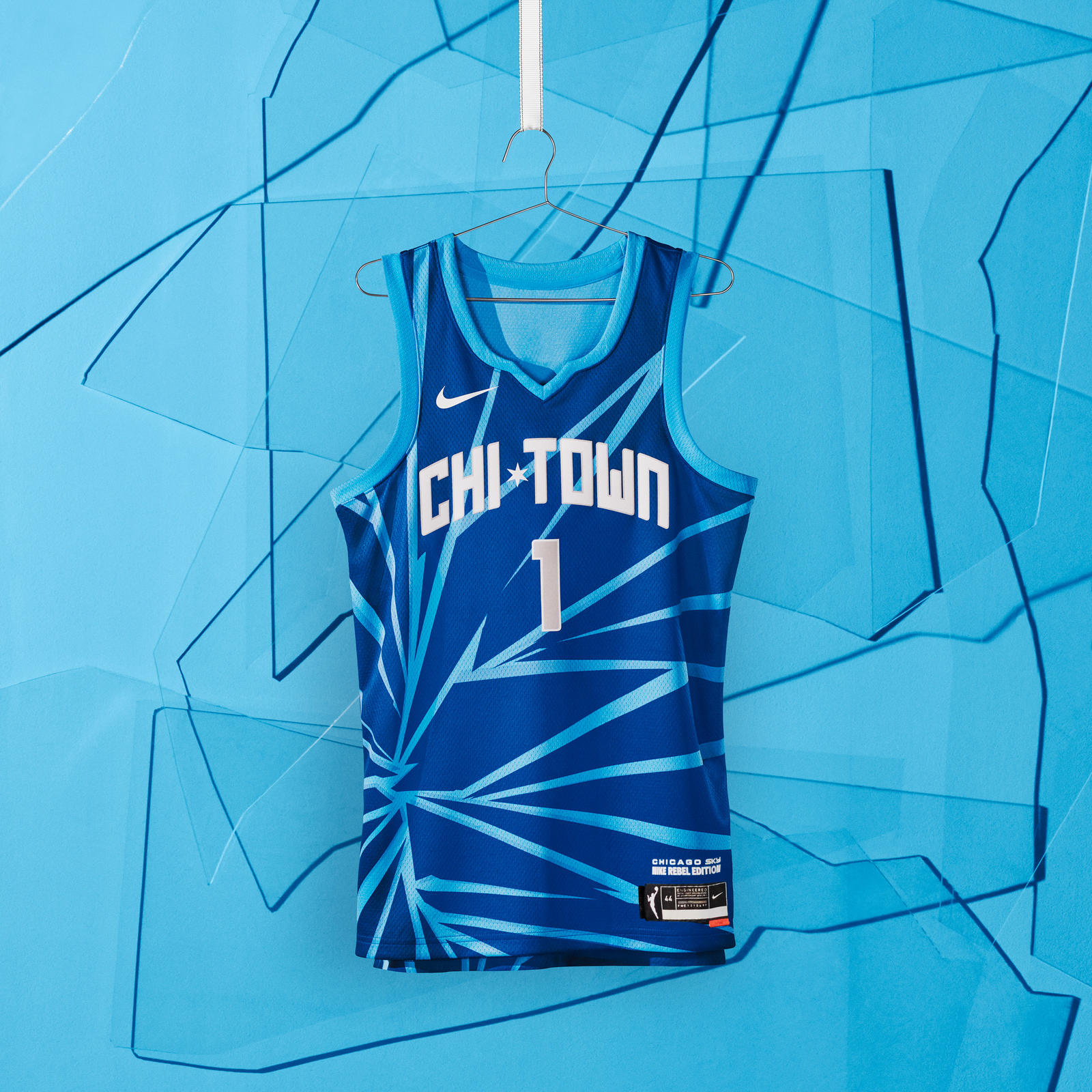 With shattered lines and a cool hue, the uniform is a reminder to all that nothing can stop a team born from the heart of the Windy City. 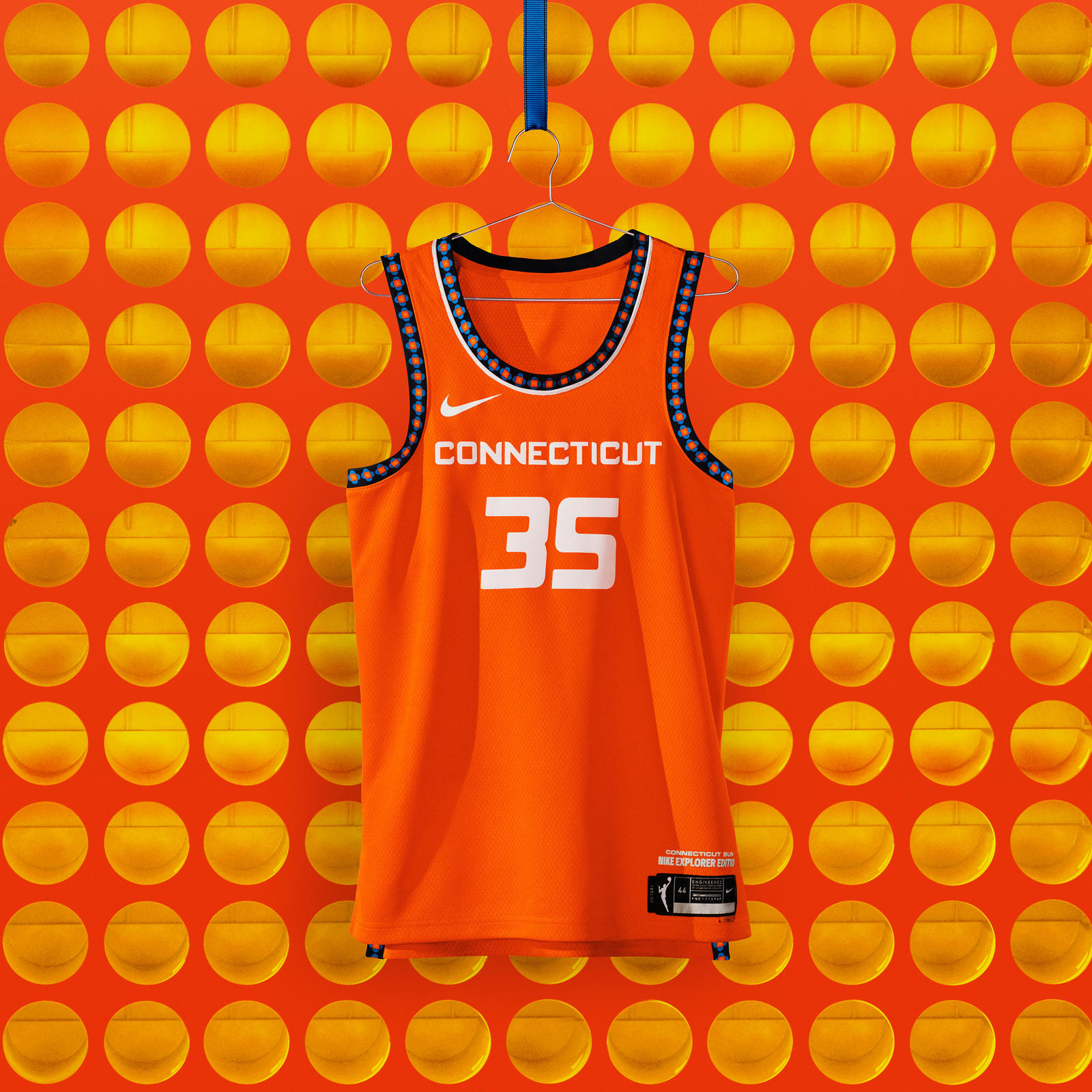 In reverence to the traditions and history of the state’s Indigenous people, the uniform features a repeating pattern of symbolic circles on taping details across an unforgettable orange that casts a sunlit-glow in an homage to the Mohegan Tribe’s heritage. 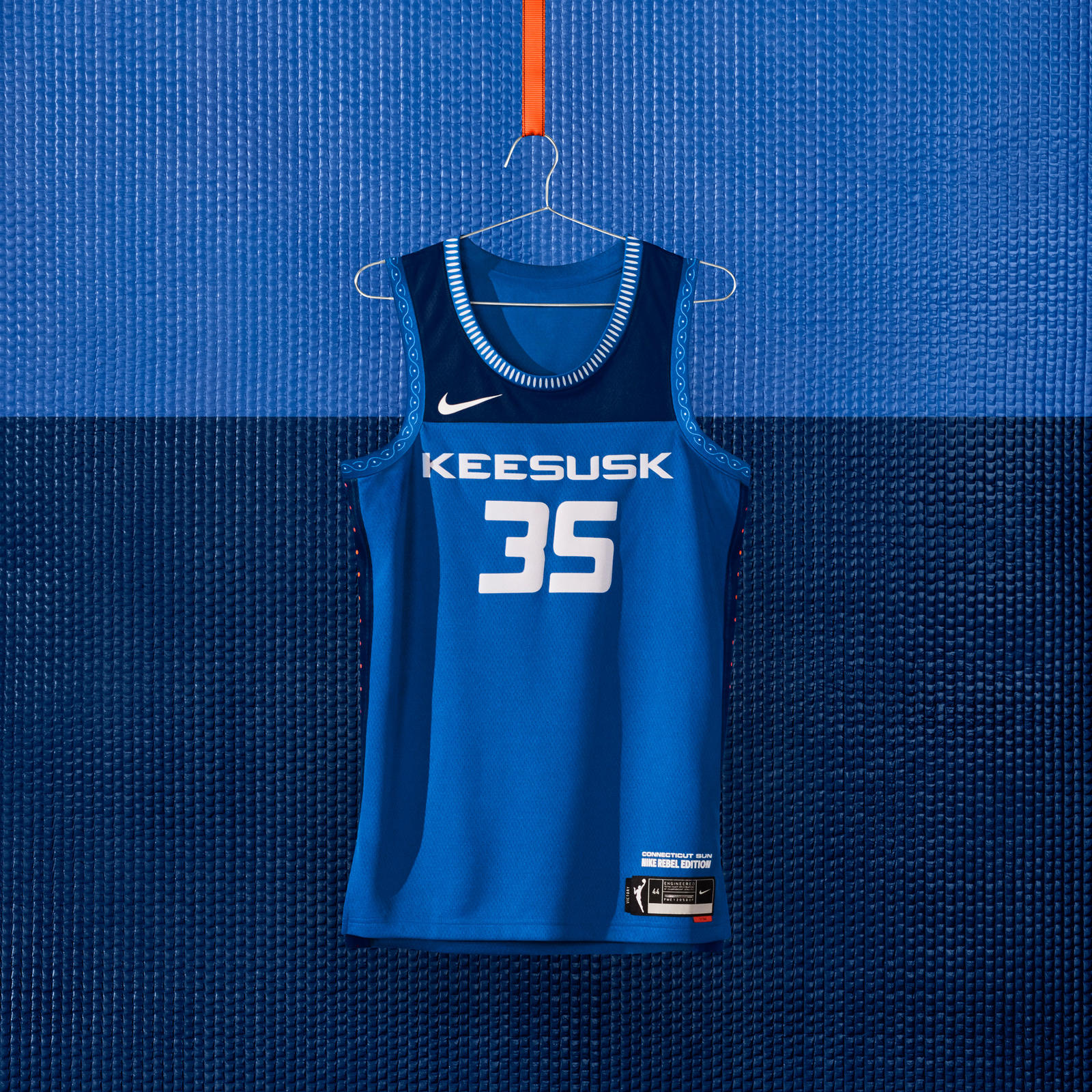 The uniform’s graphic side-taping offers a reverent nod to the Trail of Life, connecting past and future generations. Featured front and center, “Keesusk” is the Mohegan word for “Sun.” 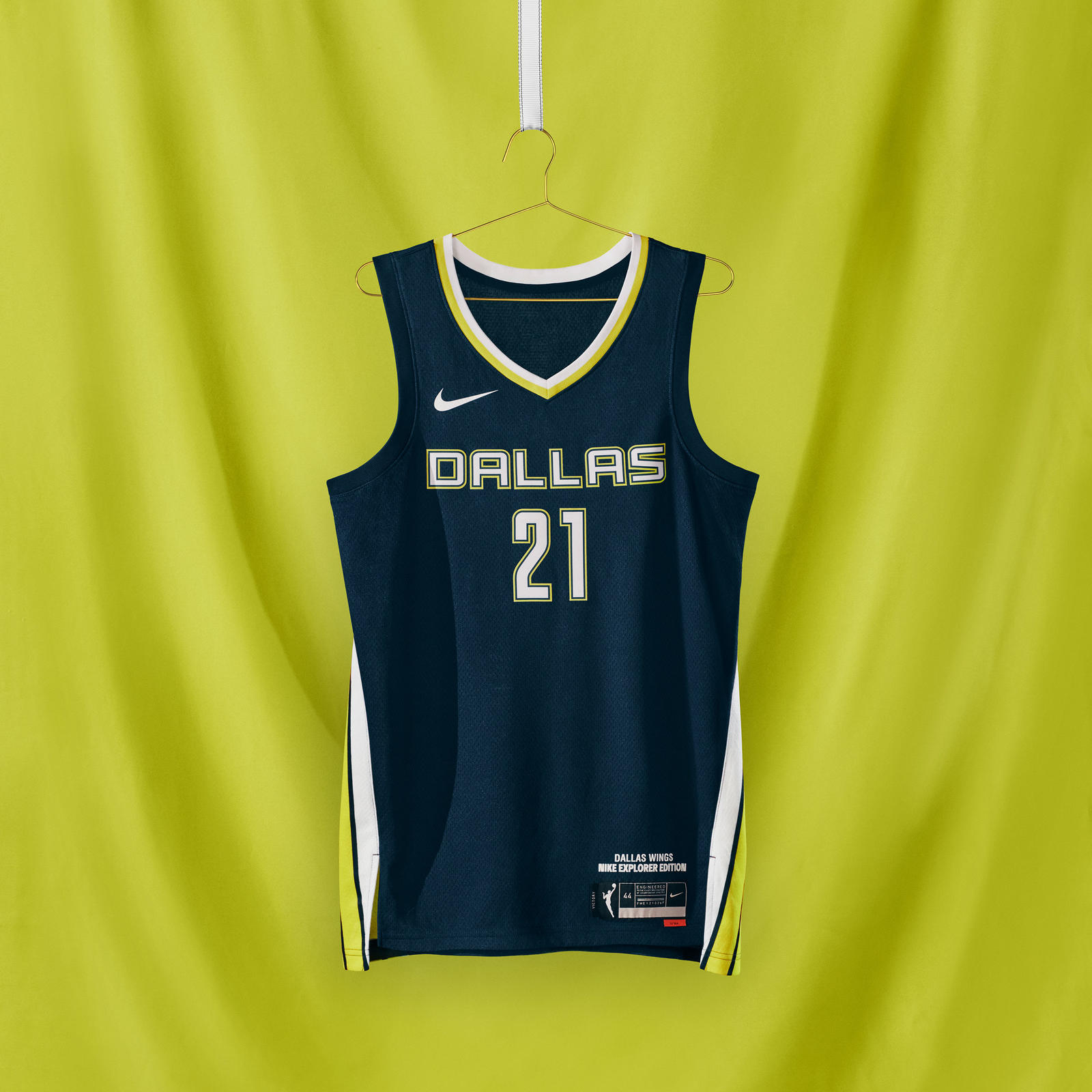 The uniform features flight-ready side details and a sky-high palette of light blues, neon greens and white that inspires daring speed. 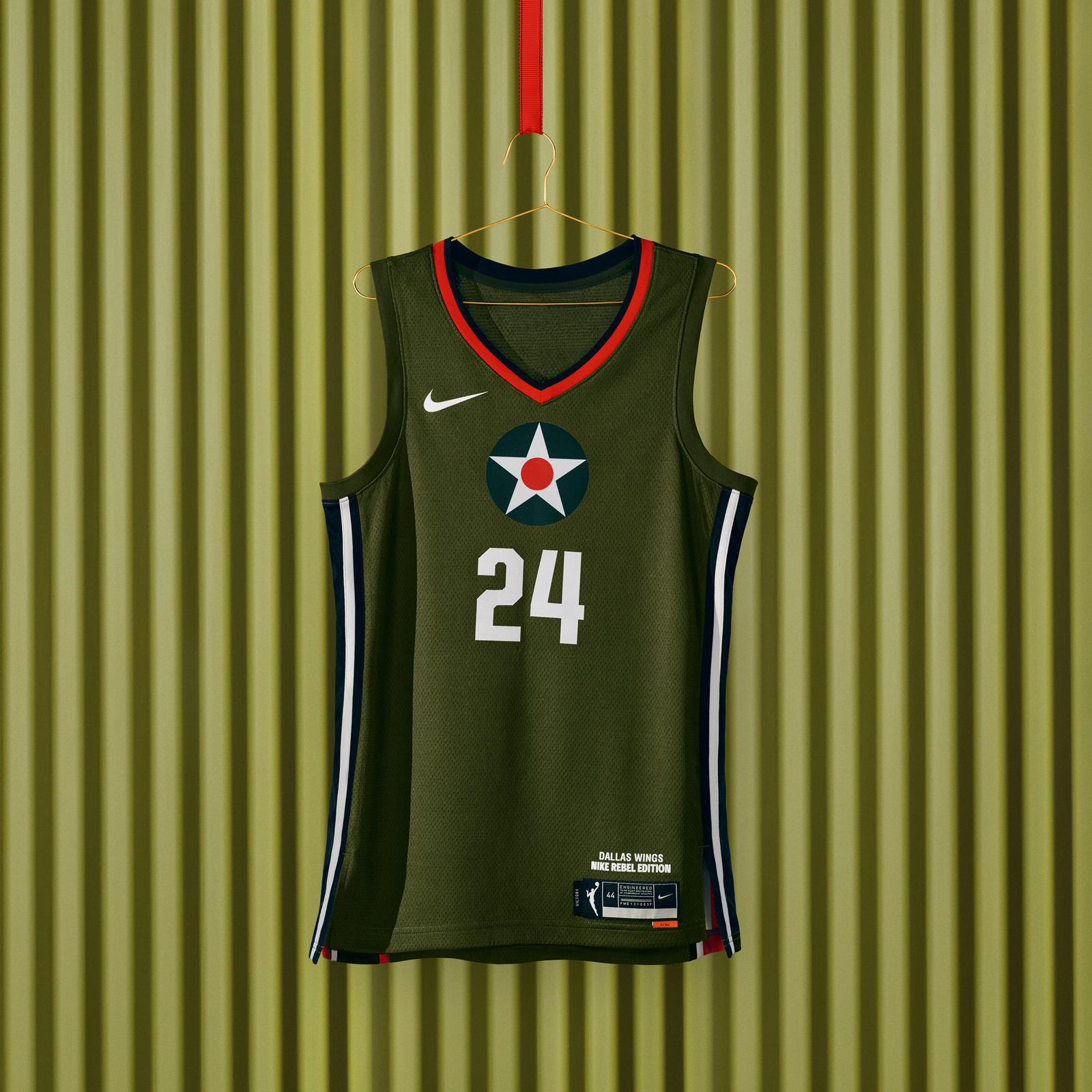 Inspired by the stealth and ferocity of the World War II P-40 Warhawk — a plane manufactured in Texas and test-flown by Women Airforce Service Pilots (W.A.S.P.) — the uniform is set over a military-grade green field. 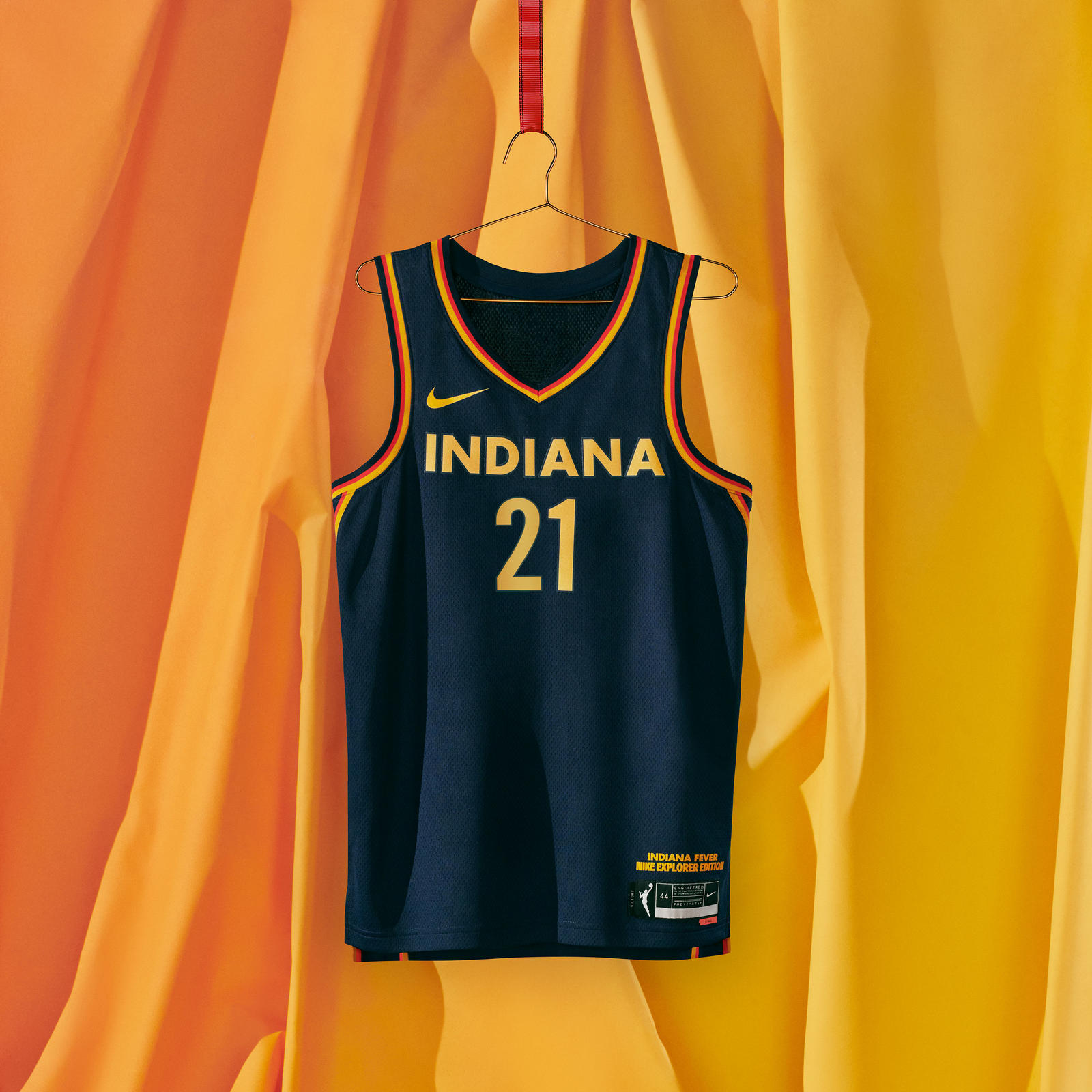 Inspired by Lady Victory, the uniform integrates sash-like details down the sides. Each feature 19 stars — an allusion to the state flag and Indiana’s place as the 19th member of the Union. 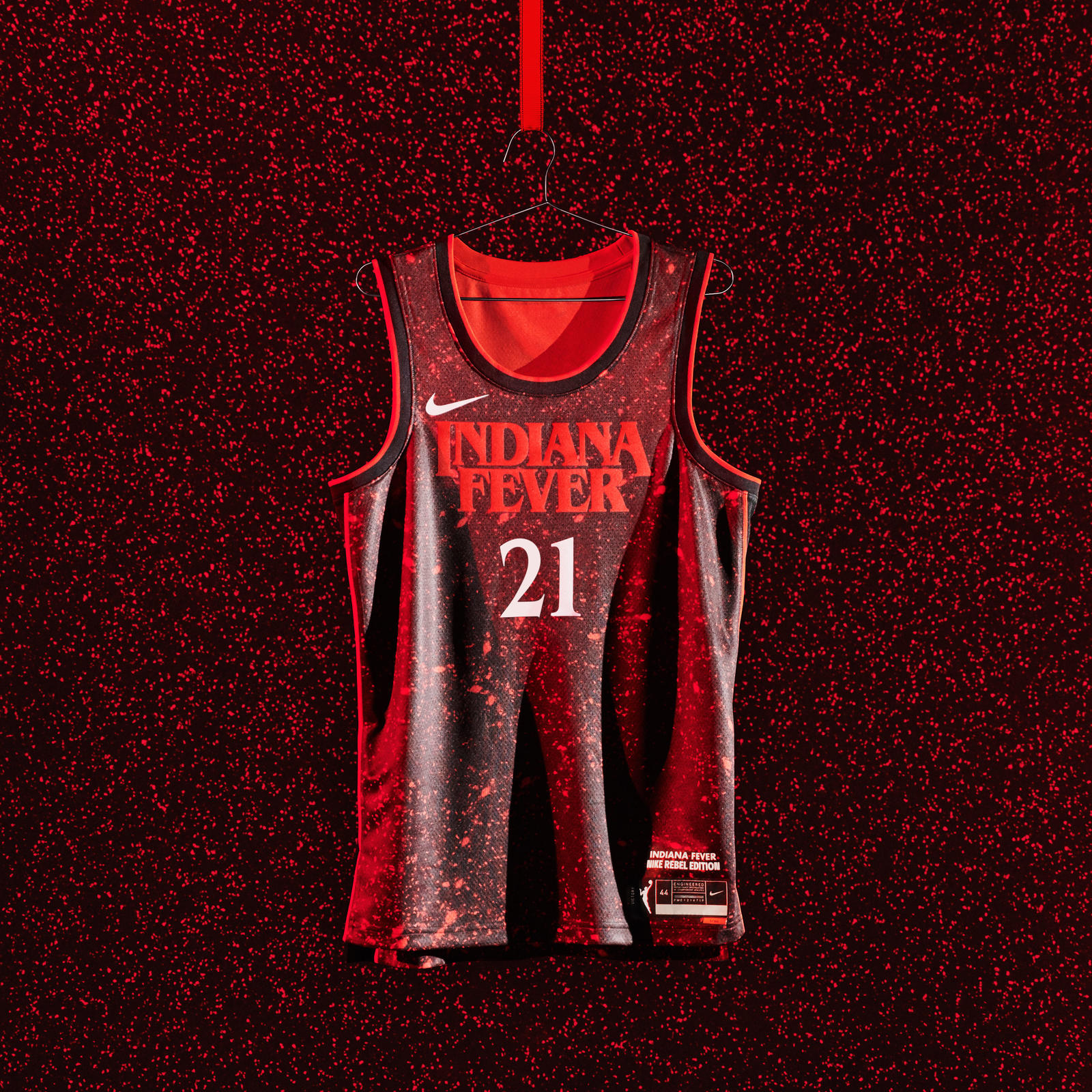 The uniform’s color, jersey wordmark and number font are drawn from the hit series that takes place in the fictional town of Hawkins, Indiana. 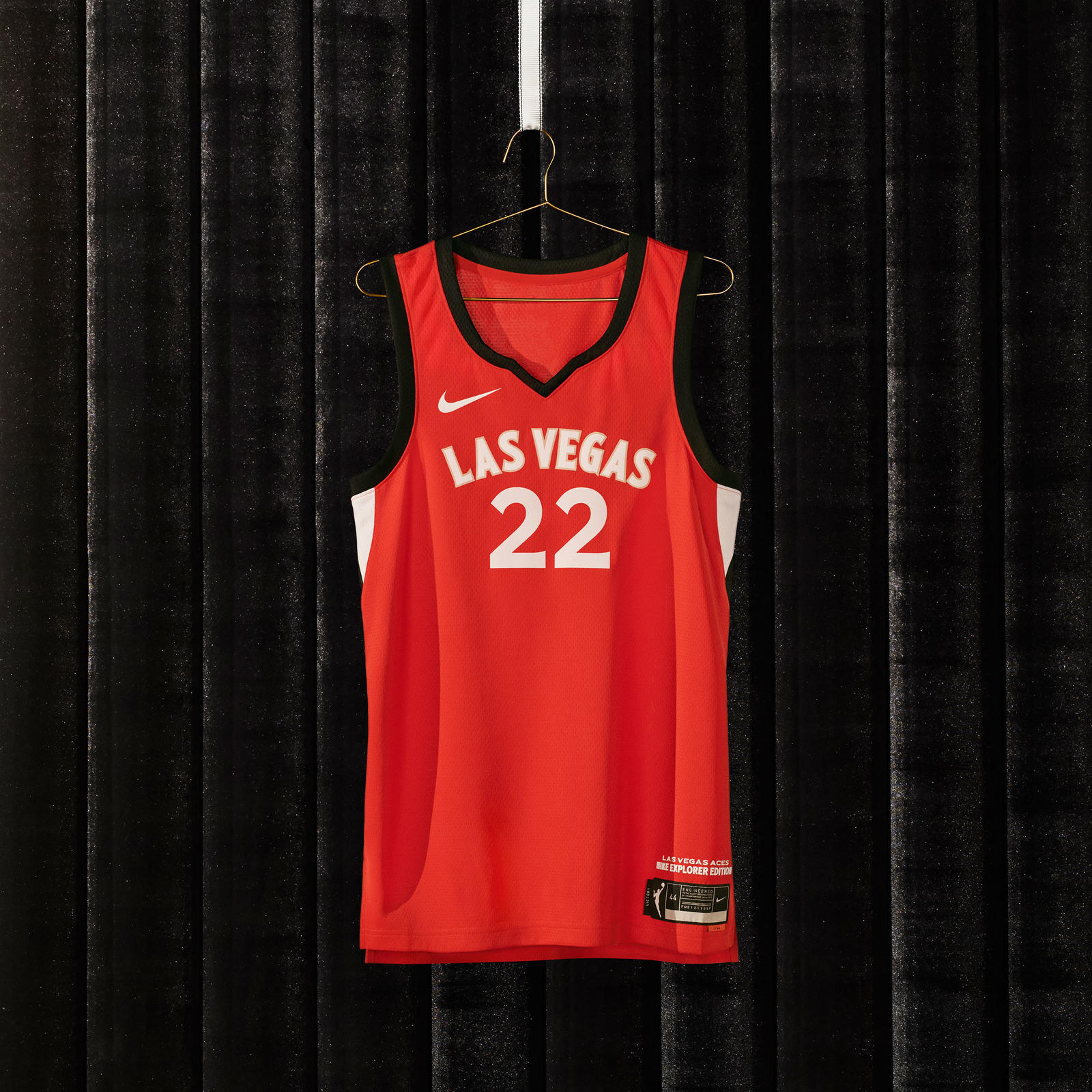 Diamond details emblazoned across the uniform’s front and back coupled with opulent gold trim and oversized type feel classic and fresh. 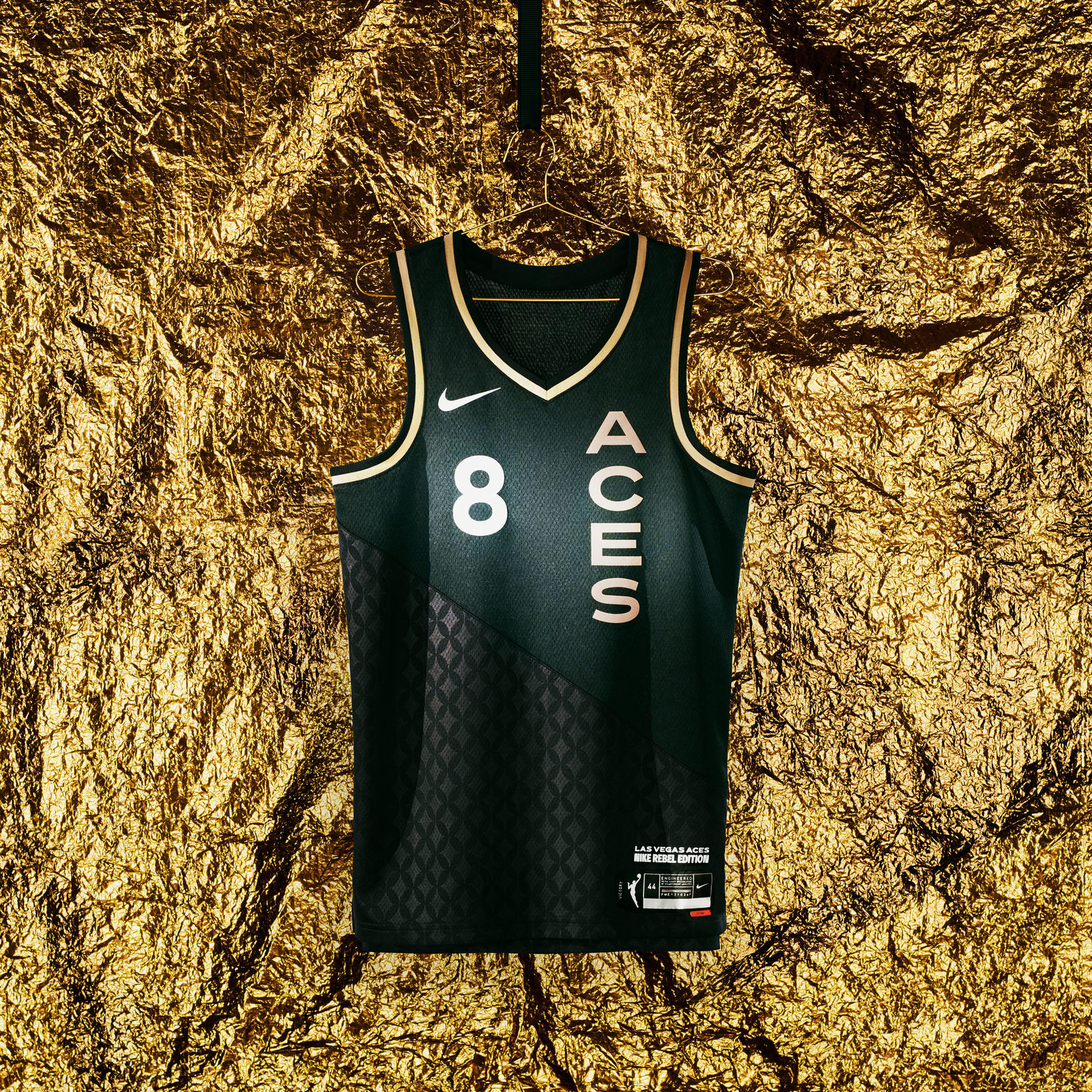 Inspired by the Ace card and in reference to those who have mastered their craft, the uniform conveys excellence and quality. 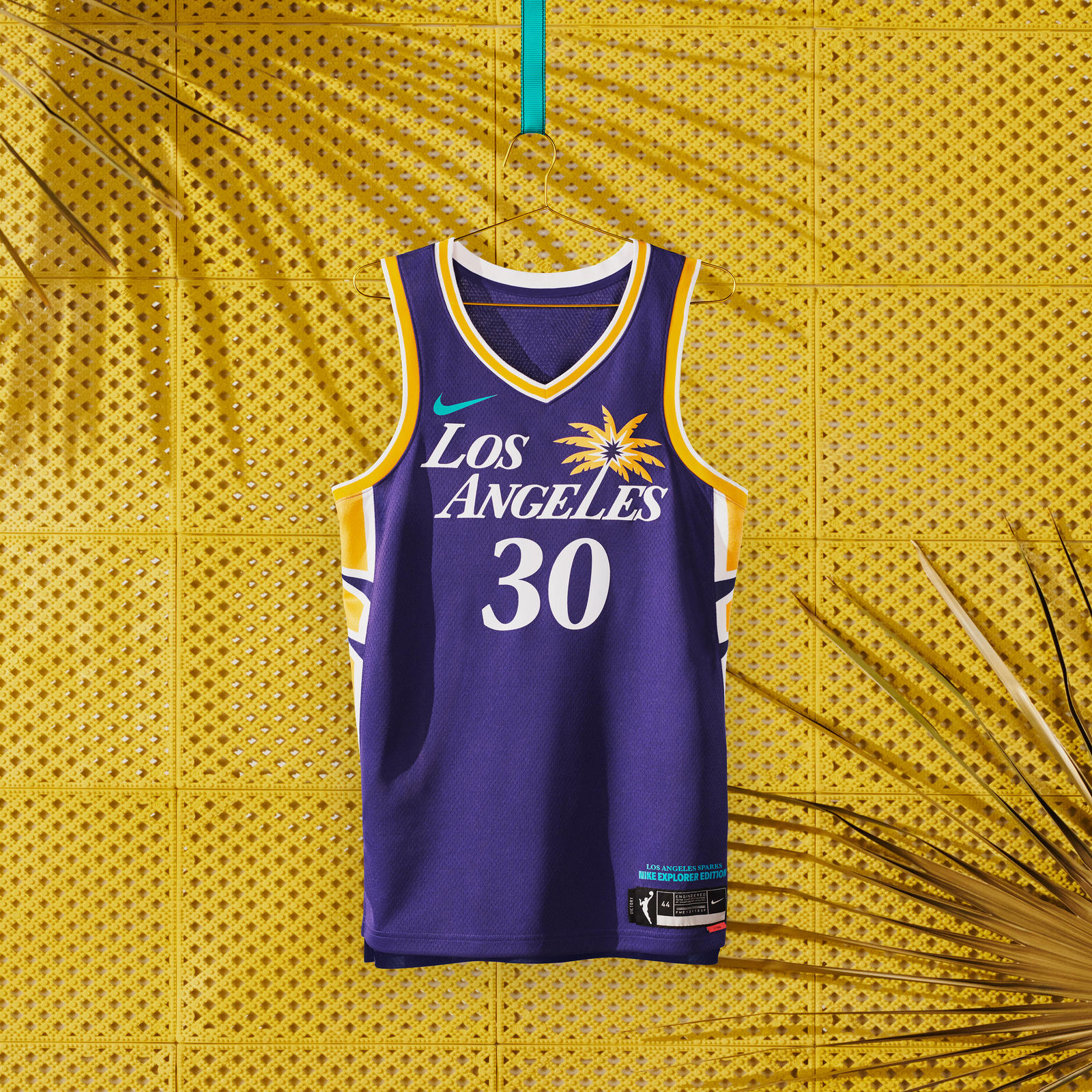 Front and center on the uniform is the team’s updated palm-inspired logo, an iconic symbol of Los Angeles’ desert weather and wide tree-lined boulevards. 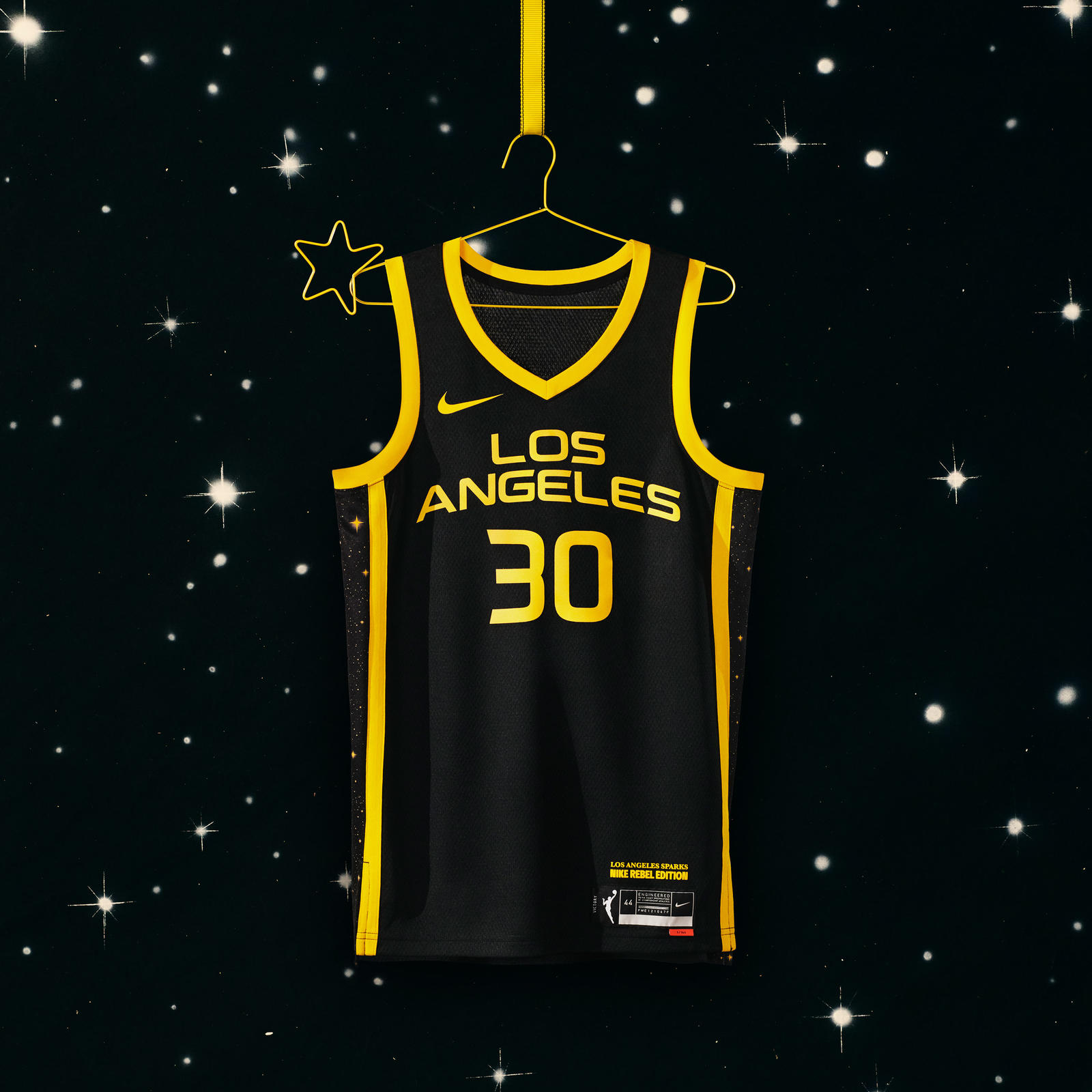 A black field bordered by yellow stripes and dozens of shining stars embodies the boundless brightness of the City of Angels. 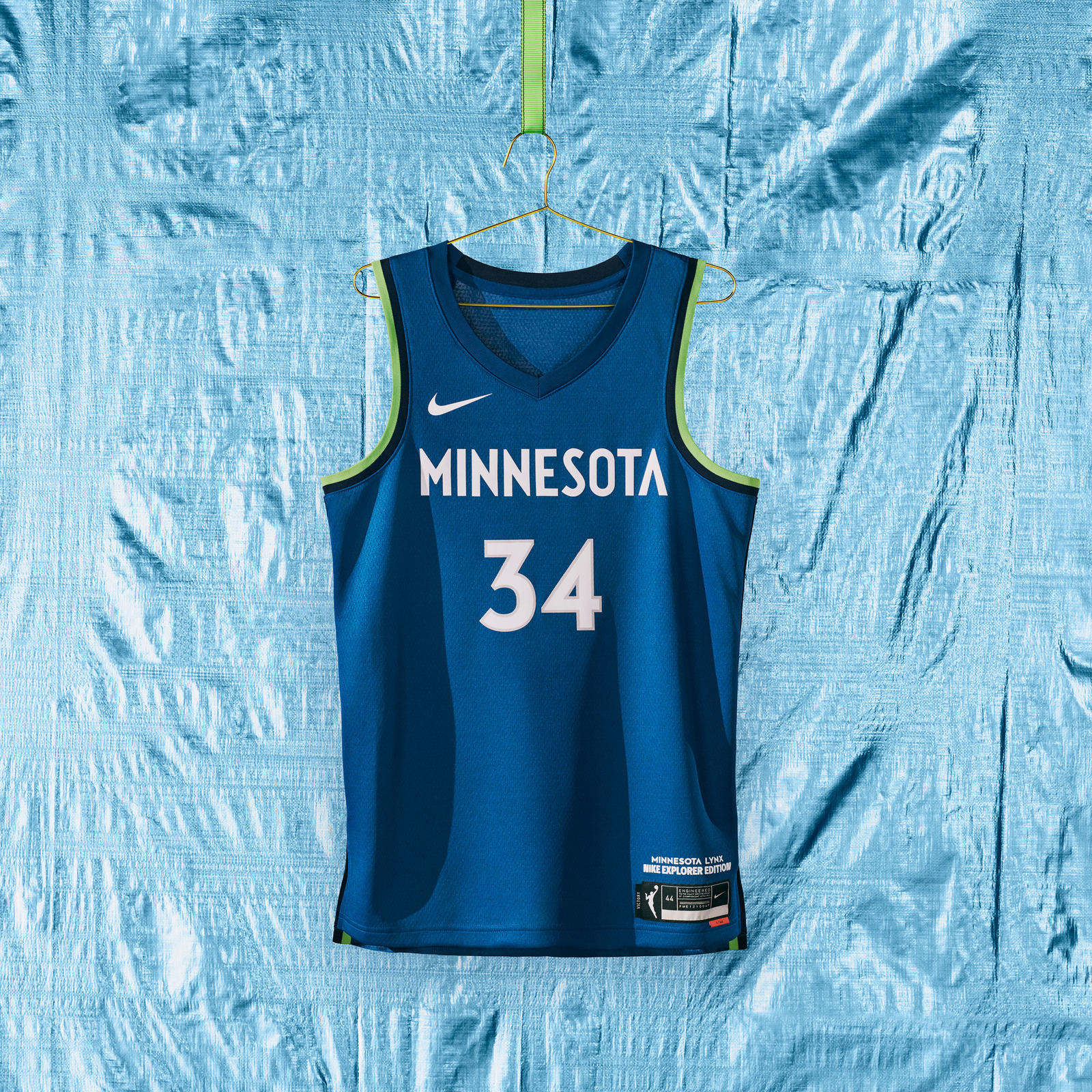 An icy blue background stands strong for the Midwest’s frigid winters, while the side tapes have a precise use of action green that nod to the hairs that tip the feline’s ears. 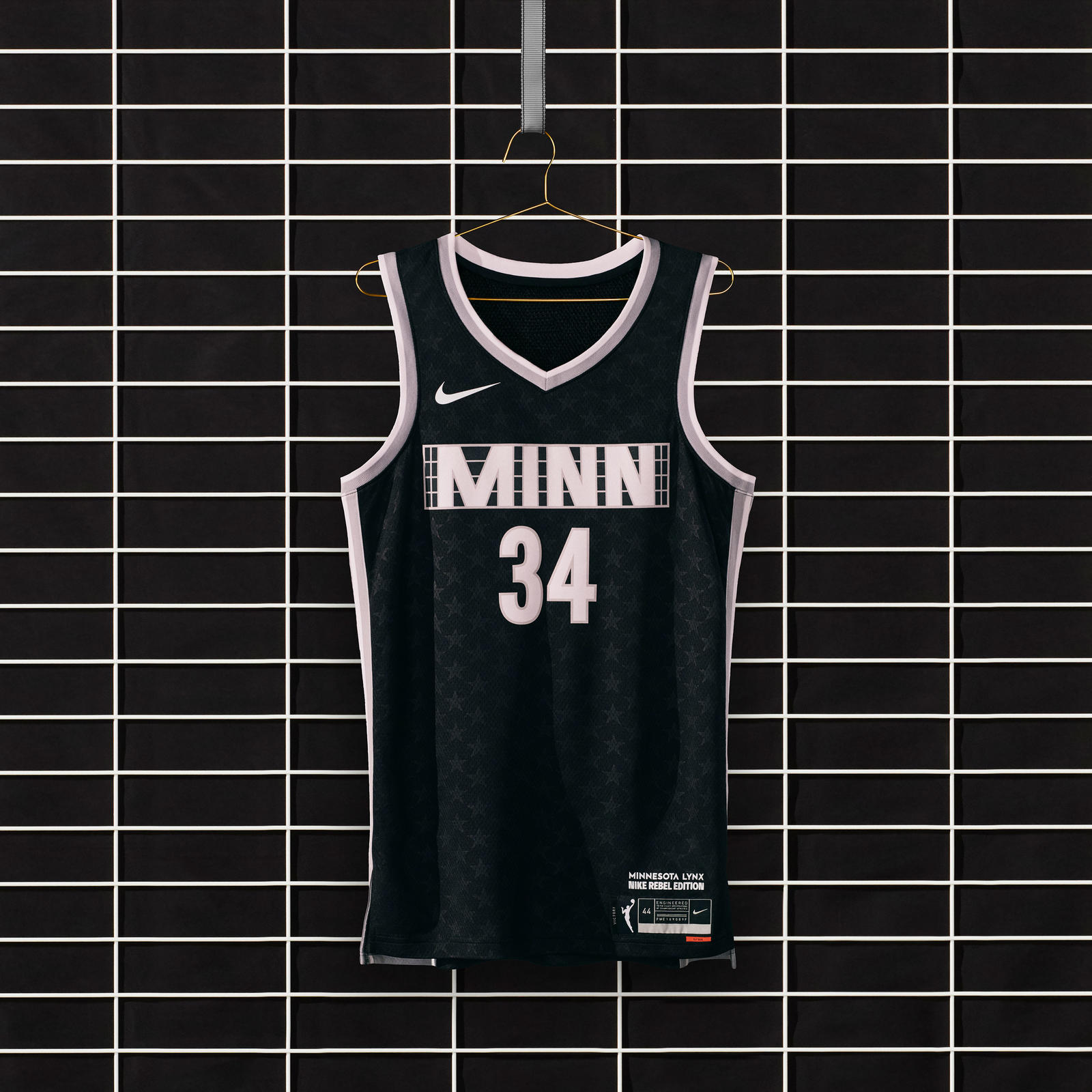 The uniform is inspired by one of the longest running, independently owned and operated music venues in the country, located near the Lynx’s home arena. 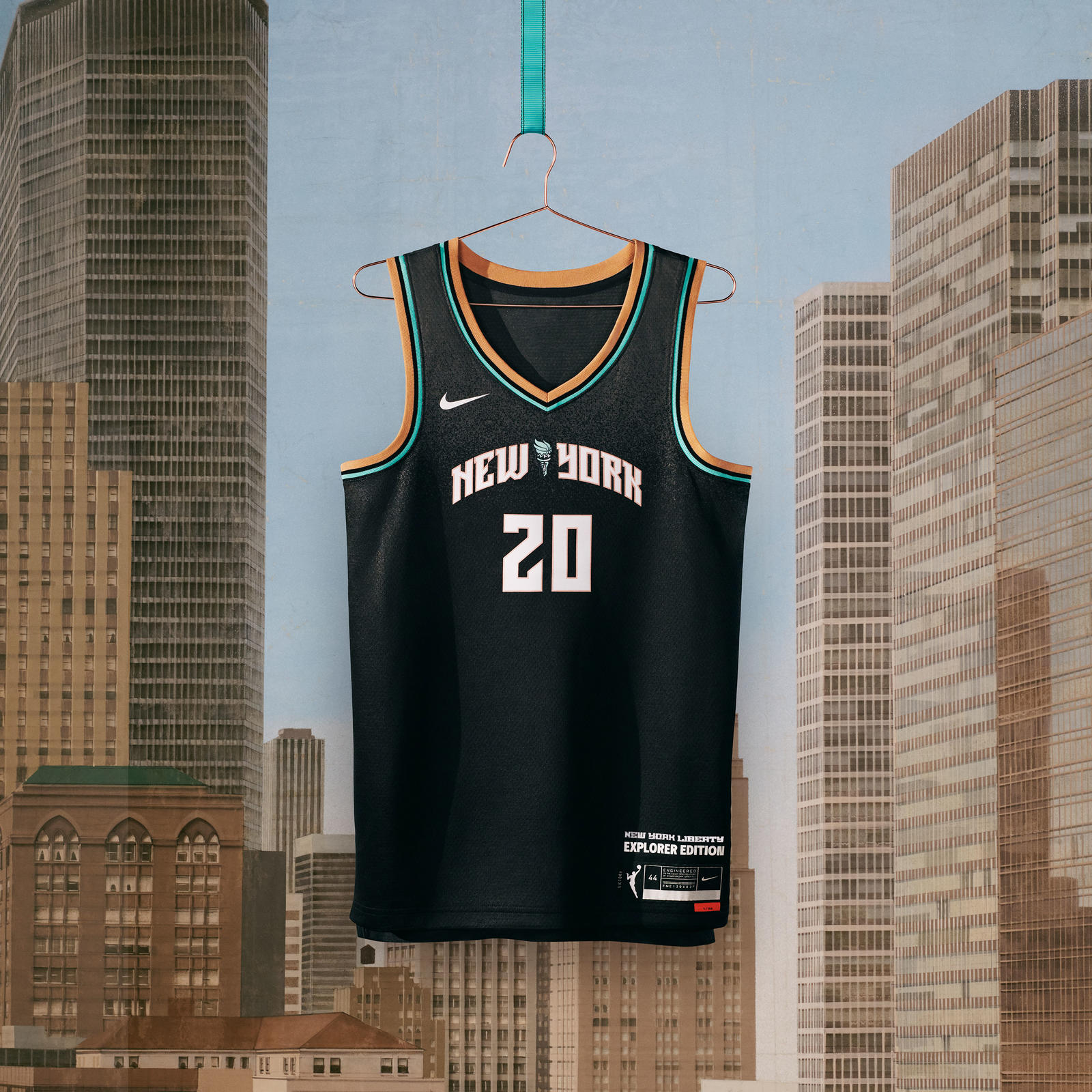 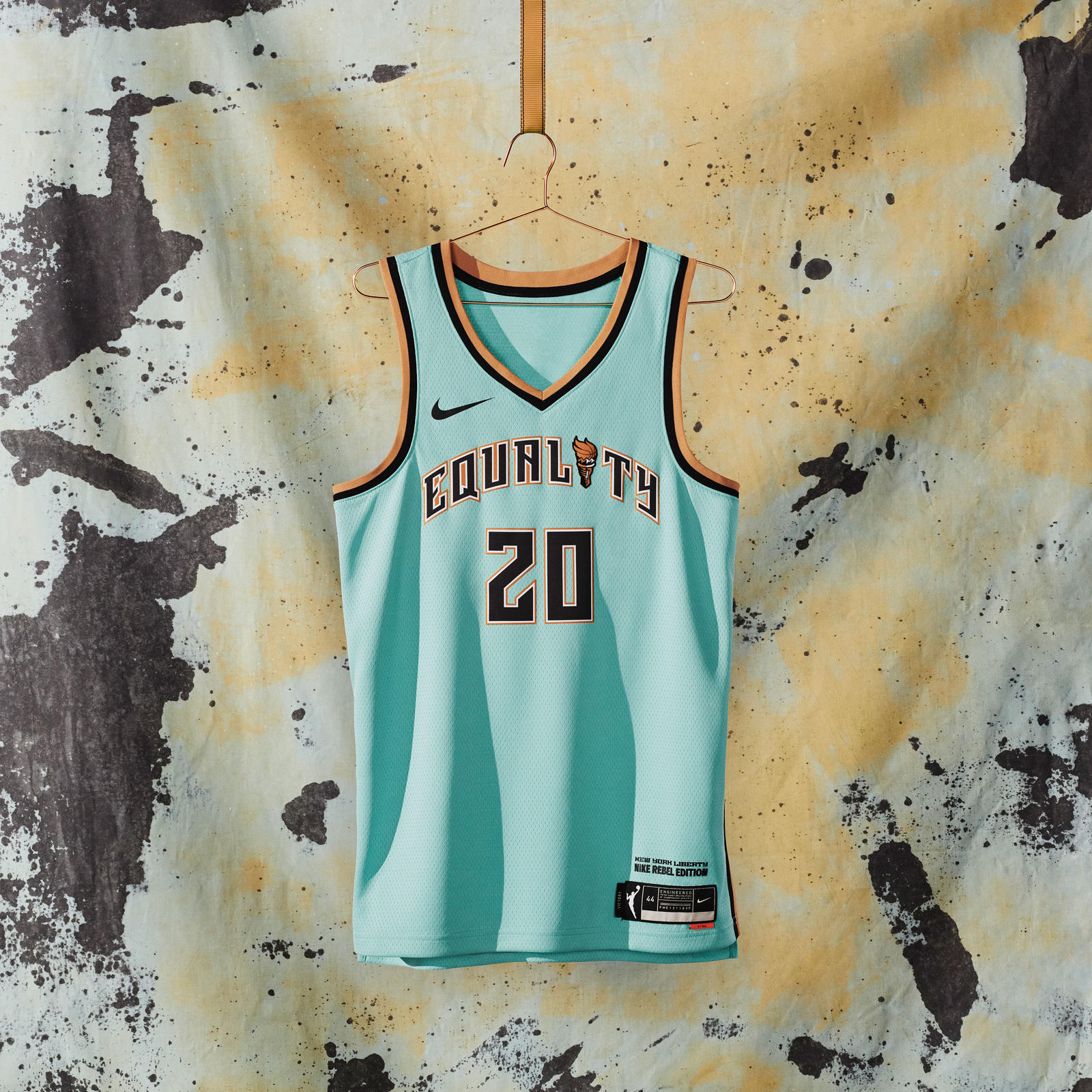 Inspired by the striking colors of the city’s iconic monument and all that it represents, the uniform features “Equality” across the chest, framed by copper and black taping. 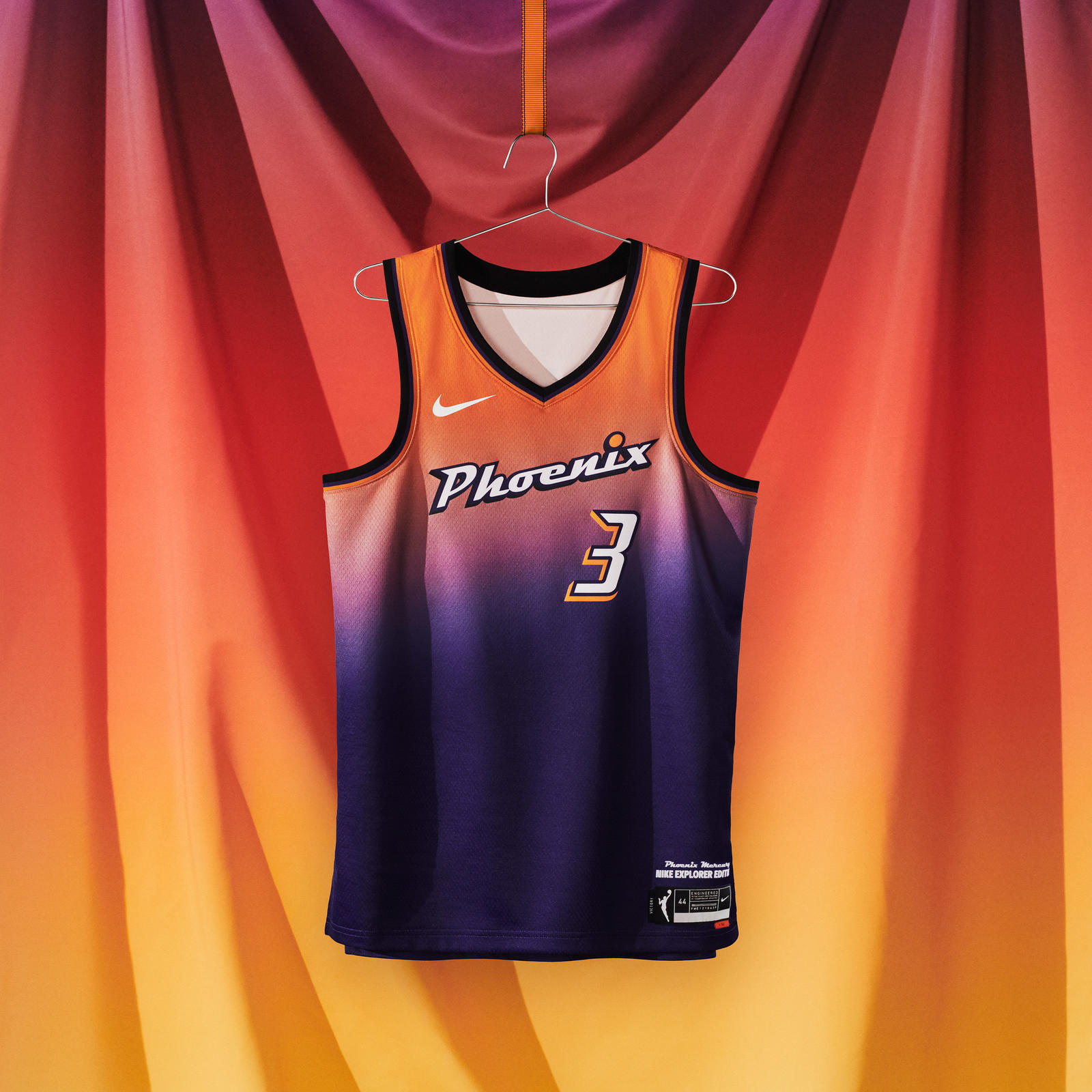 The uniform is cast in the vivid orange and purple gradient of an Arizona desert sunrise. 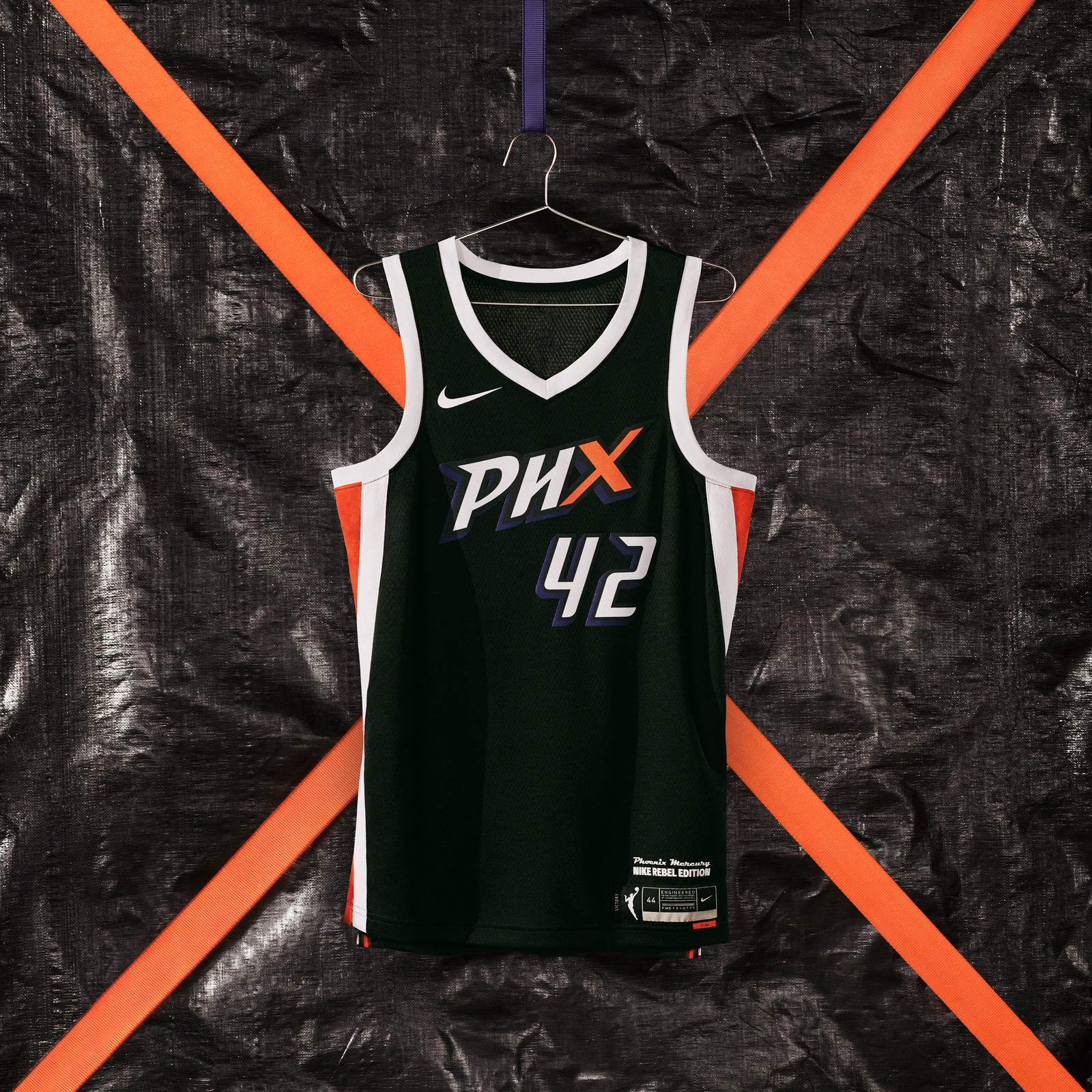 Sharp lettering and white-hot details blaze across the uniform’s front and back in an homage to the “X-Factor” — the team’s passionate fan base. 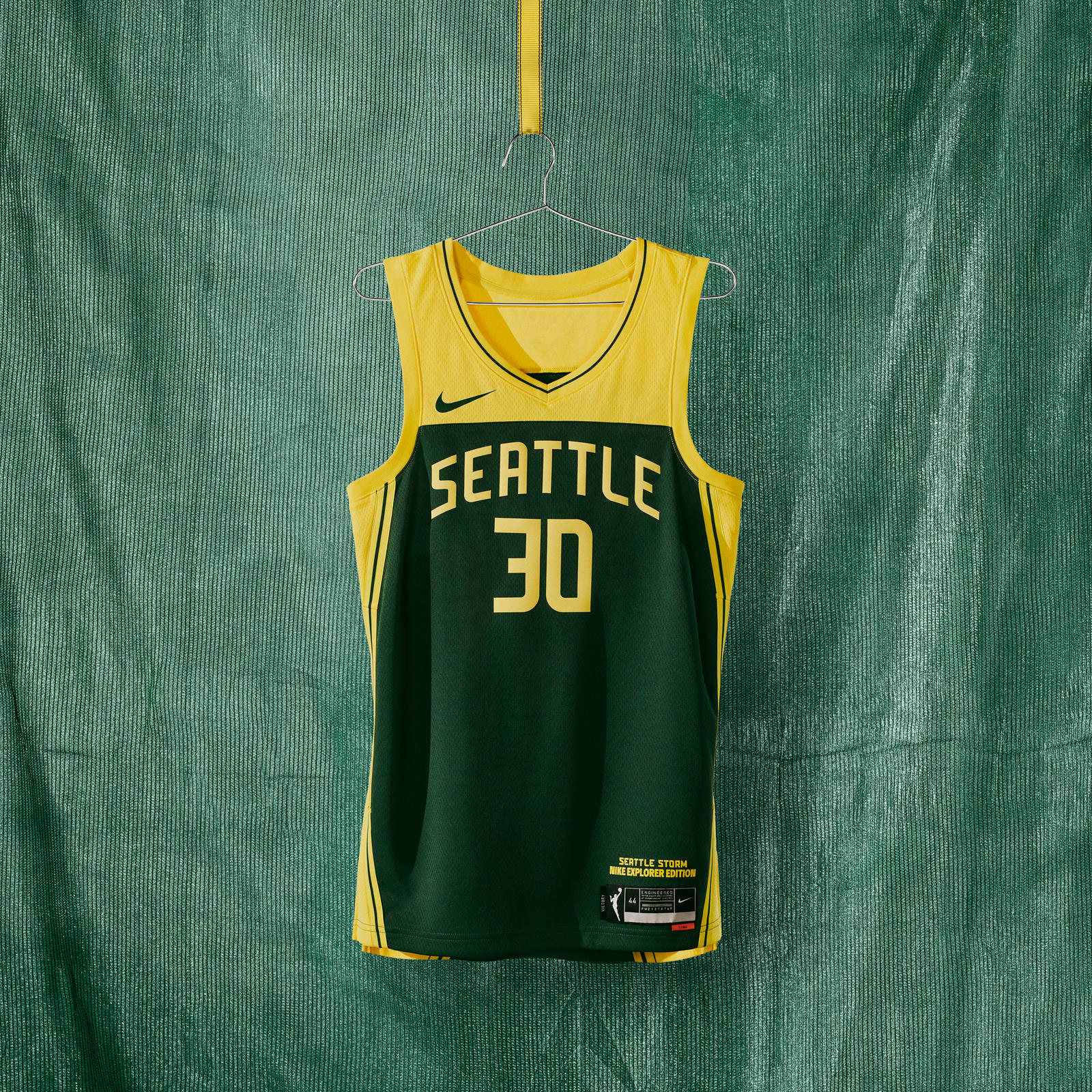 A symbol of the city’s optimistic outlook and go-getter nature, the Storm’s uniform features a sweeping yellow frame coupled with a spruce-green field. 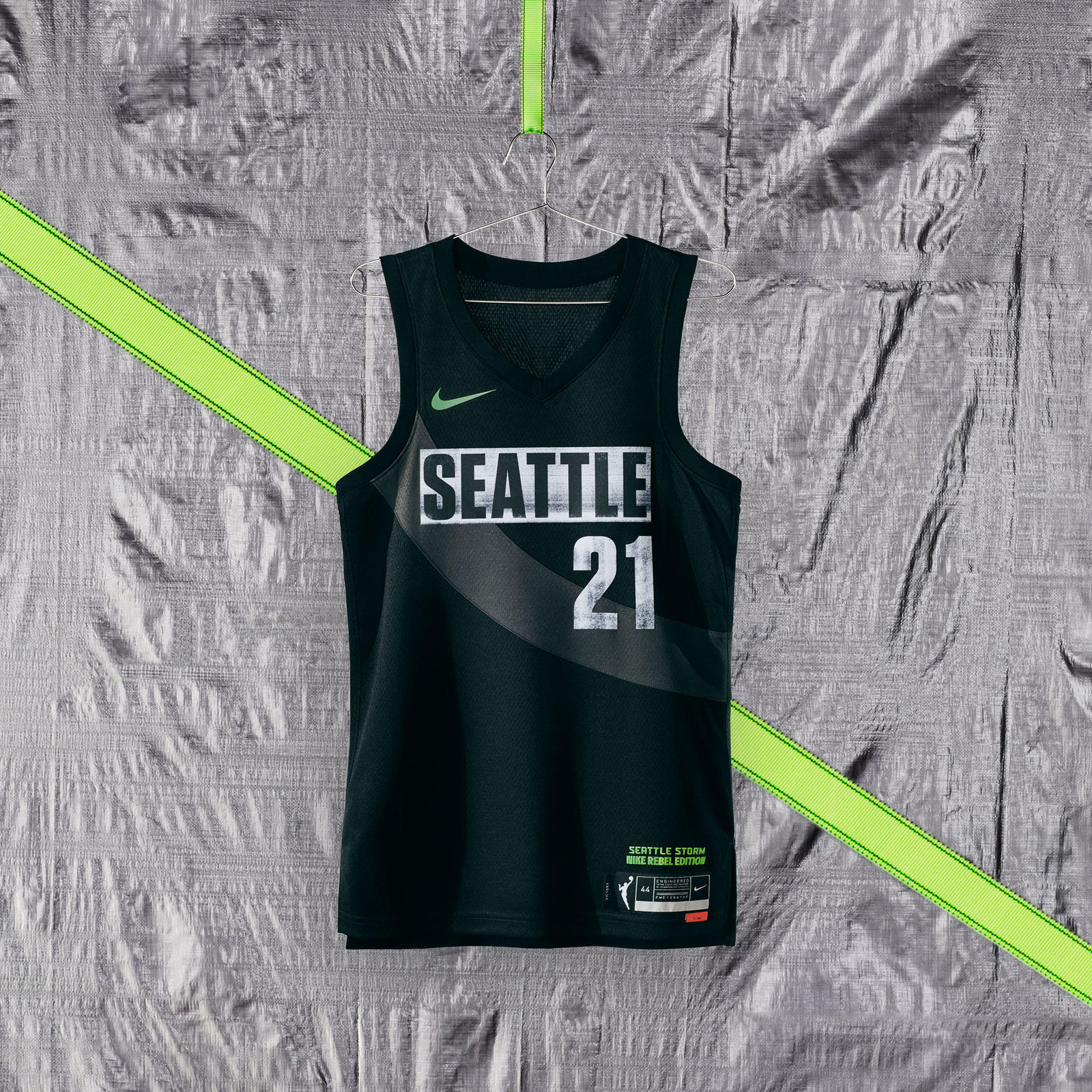 In celebration of the city’s lineage of political engagement, the Storm’s uniform centers a sash-like swoop across the chest and back symbolizing female empowerment coupled with bold, graphic type in well-worn relief. 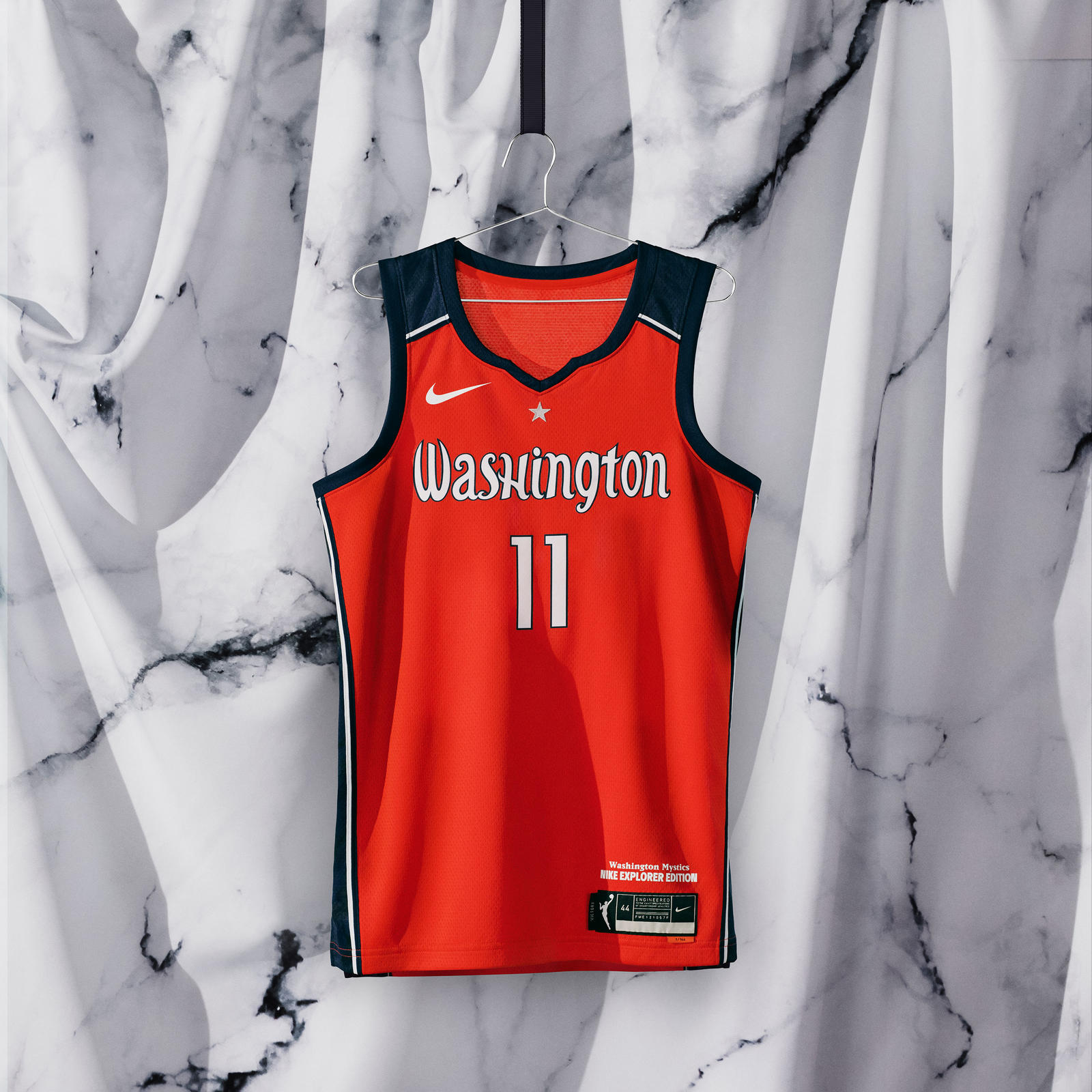 Akin to the city’s marble monuments, malls and statues, the uniform stands as a powerful pillar and symbol of D.C’s history of leadership and action. 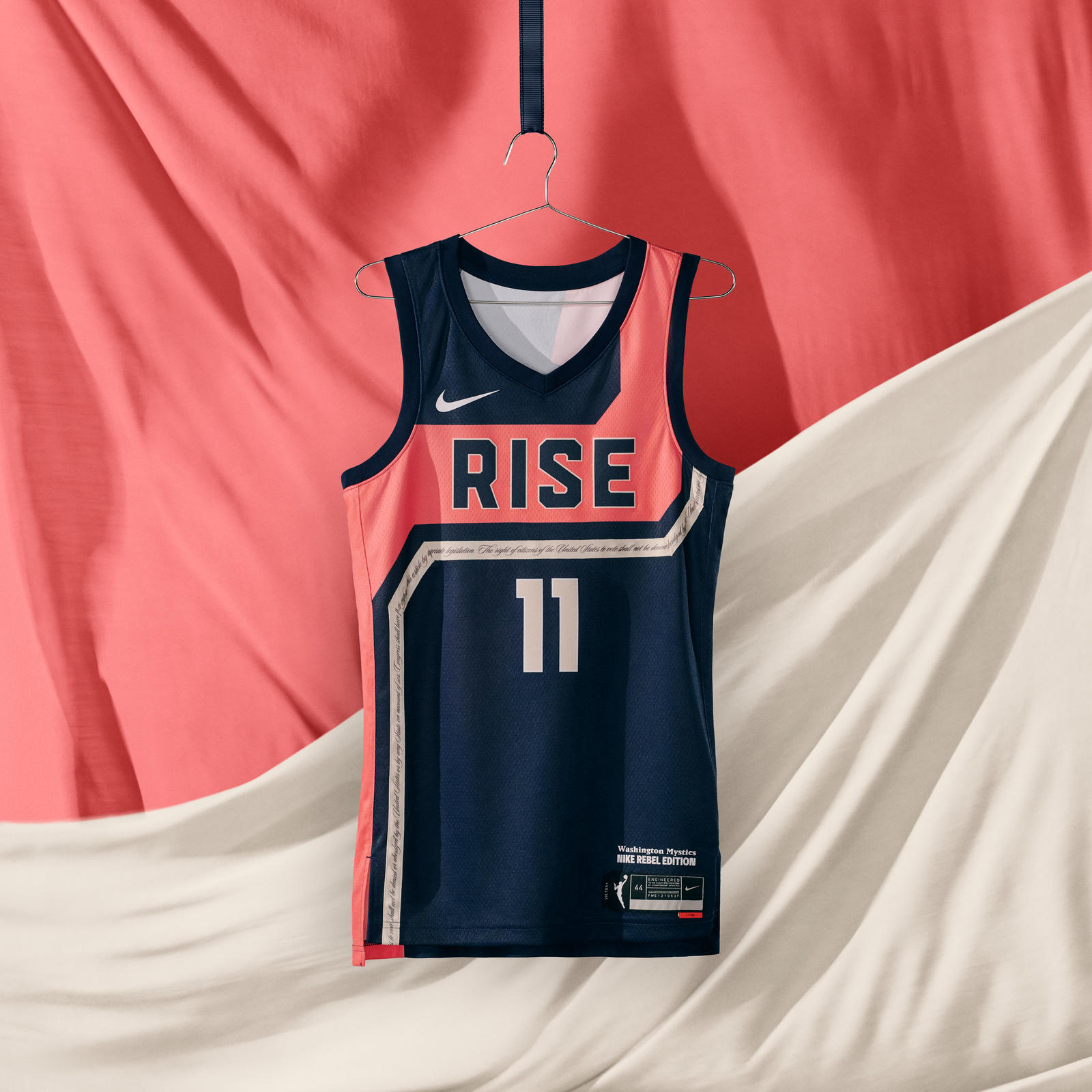 The uniform includes the words and script of the Nineteenth Amendment — giving women the right to vote — in the gold wrapping around and running down the jersey and short.

The WNBA Nike Rebel Edition Uniforms are available exclusively to Nike Members April 8 on nike.com and in the Nike App. The WNBA Nike Explorer Edition and the WNBA Team 13 collection will be available beginning April 14.

Newsletter
In this article:25th anniversary, feature, jerseys, nike, nike news, wnba
Up Next:

With the WNBA, Nike Embraces a Partnership Built on Progress Through Sport